This is Video/Blog # 2 in our Series: All About Salt.

Myth or Fact? I don’t have to worry about my sodium because I don’t use the salt shaker at meals or when cooking?

When my clients want to reduce sodium in their diets, they typically focus on the salt shaker. They believe if they don’t add salt to their food at the table or when they are cooking, it is enough to keep their salt intake low.

This is a MYTH!

Most of the salt in the average American diet – a whopping 71% according to the Centers for Disease Control and Prevention – comes from processed foods and restaurant foods – not from the salt we add during cooking or sprinkle on to our cooked steaks or vegetables!

In fact, the foods with hidden sources of salt are the biggest offenders since many do not realize they are so high in salt. The American Heart Association has dubbed these foods the “Salty Six.”

And, if they asked me, I would make it the Salty Seven and added

Can you Trust the Food Packaging Claims?

You can always look at the nutrition information label to find the milligrams (mg) per serving – just be sure to notice how much is considered one serving of the food per the label.

First, realize that some of the claims are based off comparing the lower sodium version to the regular version.

If you see “reduced sodium” on the label, that means there is at least 25% less salt than the regular version. So, if your food is a salty one – like soup that can have 2000 mg in one can, then reduced sodium may still have 1500 mg which is not what I would consider low in sodium at all.

Finally, “no salt added” means just that – salt was not added during the food processing. The food may or may not be high in salt naturally.

Check out the video where I review some food packages and talk about the salt in some common foods – including what you just might be eating for lunch today!

So getting rid of the salt shaker may not be enough to get you to your salt intake goals.

Which may make you wonder… just how much salt should I actually eating? I will answer that question with our next video! 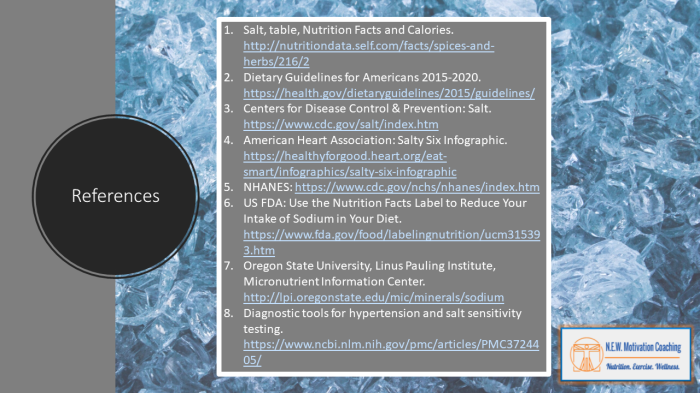 This website is written and edited by Alexia Lewis and/or by Dietetic Interns or Nutrition & Health Undergraduates. The information on this website is the opinion of the author(s) and is not a replacement for medical advice and is not personalized for you. The advice and information contained on this website may not be appropriate for all individuals. Consult with a medical professional before making any changes to your health or lifestyle habits. If you choose to follow the recommendations given on AlexiaLewisRD without consulting your physician, you are doing so at your own risk.

Check out my blog